Ancestry.com index to the 1950 US Census

I really wasn't expecting a lot and thought I'd have to wait until the human indexers were finished before really diving into it. To my surprise I had a lot of luck finding most of the people I was looking for. My grandparents, my parents, some of their neighbors and friends, aunts and uncles etc.

There was only one person I was unable to locate in 1950. My maternal great grandmother Roxie Anna Hughes Webb 1876-1961. Various records have her name as Roxy Ann, Roxie, Roxana, Anna and I'm sure there are other variants.

Ancestry.com also had its own handwriting recognition software that was supposed to come out later in the summer.  Ancestry® to Apply Handwriting Recognition Artificial Intelligence to Create a Searchable Index of the 1950 U.S. Census | Ancestry Corporate

Instead, Ancestry.com released their version yesterday because as I was looking someone else up, a link to a 1950 census record came up in the results. I re-ran my search for Roxie Anna and she instantly came up. Her name was listed as Rox Anna. She was also listed as a lodger in the household of Sherman Moore and family. I'm not sure if this family is somehow related to her or not.

In 1940 she was living with her daughter Sybil Webb Reasoner and her family. Both households were in Russellville, Pope County, Arkansas.

I can't make out the street name of the Reasoner household in the 1950 census but they still were in Russellville so I can't tell how far they are from each other.

It's very cool how good the handwriting recognition program is working. It will be interesting to see how much better it will be when the 1960 census is released in 10 years.
Posted by Daniel Sample at 4:31 PM No comments:

Here is a picture of my grandmother Ruth Eileen McFadden Webb (1905-1985) with my mother and aunt from about 1940-1941. They are standing in front of Bittners Department Store in Sunbury Pennsylvania. Not sure who took the photo. It could have been her mother Elizabeth 'Lizzie' Christine Neuland McFadden (1866-1949). My grandfather Clyde Lee Webb (1898-1987) was a salesman and was often traveling.
Not sure who the boy photobombing the picture is. 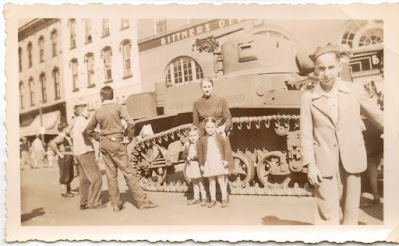 Here is an image from Google Maps of the same area from October 2021. 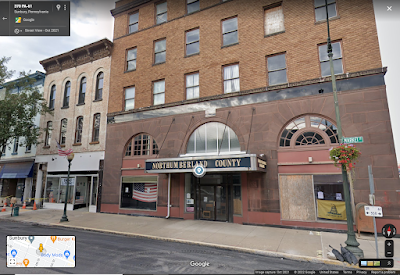 Below is an image from the local newspaper probably close to the time they visited the location. Definitely need to visit when I take my road-trip to Pennsylvania and the area.
The Sunbury Daily Item, Sunbury, Pennsylvania. Wednesday, May 29, 1940. Second Page. 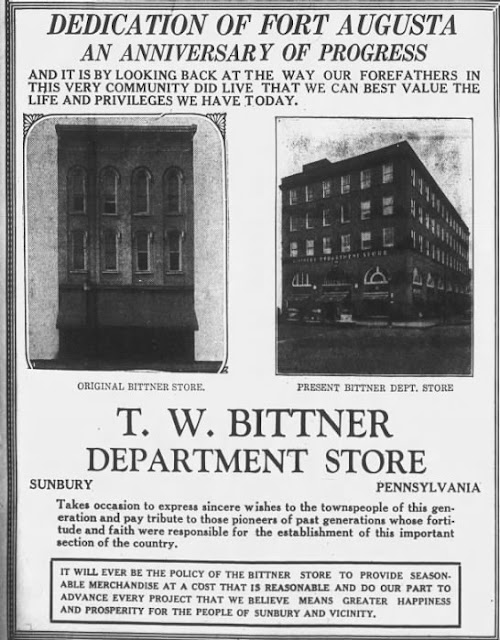 According to the 1940 US Census, they were living with her mother Elizabeth in Baltimore.
Posted by Daniel Sample at 8:47 AM No comments:

According to the death record from the Diocese of Steubenville in Steubenville, Ohio Manus Ferry died on 12 July 1883. 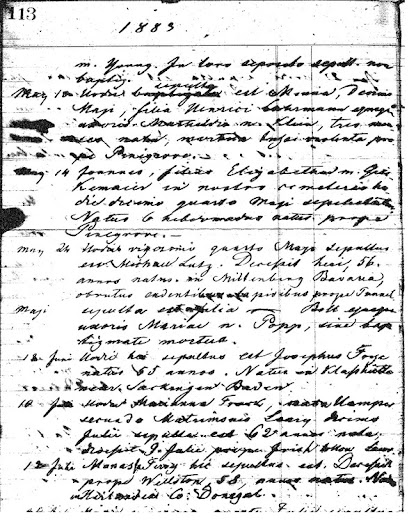 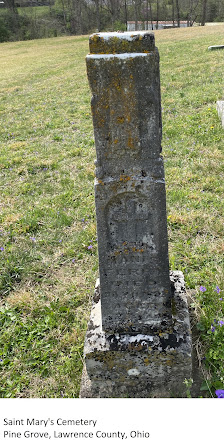 On 7 October 1905 his wife Margaret McFadden Ferry (1845-1905) died in Newark, Licking County, Ohio. She is buried in Cedar Hill Cemetery in Newark, Ohio in an unmarked grave.

According to her file at the Cedar Hill office on the 22 November 1907 the body of Manus was relocated and buried next to Margaret. His headstone is still, as far as I know at St. Mary's Cemetery.

Wonder why the headstone was not relocated. Perhaps too expensive?

Posted by Daniel Sample at 2:38 PM No comments:

I was researching old Newspapers for the name Schildhauer in Ohio and came across this article.

of the Baltimore & Ohio shops H.L. Needam, and the foreman of

various departments under him.

It also goes on to mention H.L. Schildhauer and his machine shop. So far, I have been unable to locate any information on Hempstead and his photography business. Hopefully some of his photographs are out there and I'm able to track them down.

Posted by Daniel Sample at 9:20 AM No comments:

What happened to Charles McFadden

The McFadden family is giving me plenty of mysteries to look into. My great grandfather, Dennis McFadden (1842-1924) came from Ireland as best I can estimate sometime in the 1850s and settled in Ohio.

The 1860 US census for Clinton Township, Vinton County, Ohio shows him in the likely home of his parents Edward and Alice McFadden. Also in the home is his brother John and two boarders.

In the 1870 US census Edward and Alice are still in Vinton County with a boarder listed on the following page. John was killed in the Civil War at the battle of Mission Ridge in Tennessee on Nov 25, 1863.

Dennis has not been located in the 1870 census.

John's parents applied for his Civil War pension. In her statement, Margaret Ferry states that she is the daughter of Edward and Alice McFadden and is the wife of Manus Ferry.

She says that she is the their only daughter and that she has three brothers.

him for over 12 years & we suppose he

is dead. Dennis is living but away

and did not since contribute any

support to Father and Mother –John

was a good boy & man to provide for

and help Father and Mother, he contributed

to their support by his labor

and earnings before the war. and lived

with them until he enlisted into the

service in which he was killed 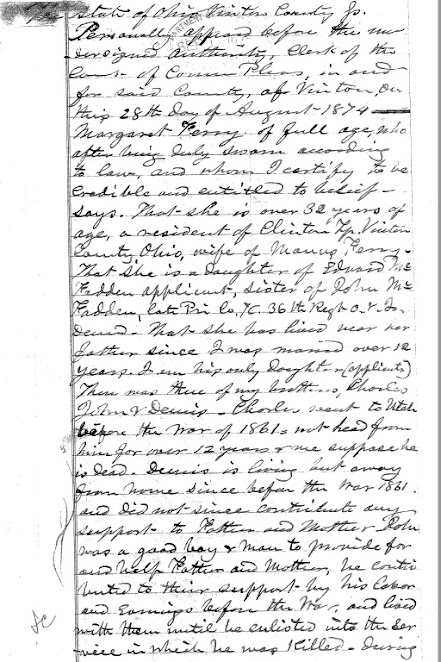 Alice McFadden also made a statement, and it is virtually the same as Margaret's except she added regarding Charles that she has not heard from him since he left when he was with army going to Utah.

It sounds like Charles may have either just left  or he enlisted in the army and his unit headed off to Utah in 1861.

So far, I have not found a good candidate for either option.

Posted by Daniel Sample at 2:08 PM No comments:

MyHeritage.com has recently added a new option that allows you to animate

the faces of people in your photographs. 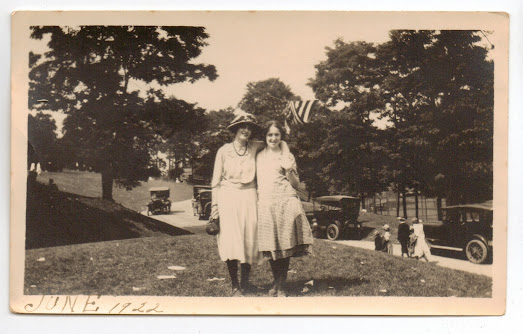 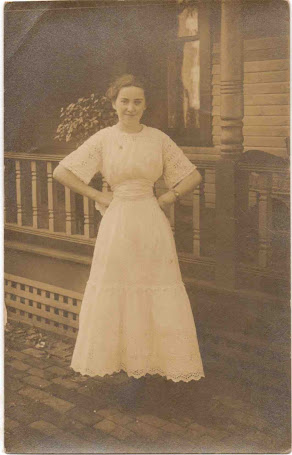 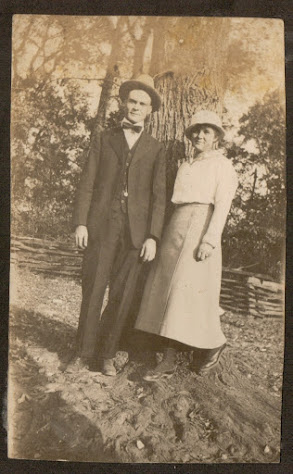 Click here and here.
Posted by Daniel Sample at 1:35 PM No comments:

Who is Adolph Zink?

I can't believe it's been so long since I've posted something. It has been a heck of a year or so.  Anyway, I kind of fell down a rabbit hole this weekend so I thought I'd share it here.

It is a Saturday night so I'm staying in, avoiding people. Also, apparently there is a pandemic or something. So I'm relaxing by watching obscure, little seen silent movies from the late 1800s to the early 1900s.

One of the films is called Adolph Zink (1903?) and is 11 minutes. It features a little person vaudeville performer going through several costume changes both as male and female characters. We never get to see his stage performance.

I've been trying to find out more about him, but so far no luck. There are a lot of Adolph Zinks and my next step is to separate them. This may turn out to be a bigger project than I first thought.

Posted by Daniel Sample at 6:58 PM No comments: