While scanning some negatives, I came across this interesting picture.  At first I thought this was an early movie theater because of the sign on the back wall with Episode no. 2 on top of the frame.  The kids could have been dressed up for the serial (like an early The Rocky Horror Picture Show).

I quickly dismissed that idea and my second thought was this is a school and the kids are putting on a play.  The two kids in back (at first I thought they might be teachers) look like they could be the king and queen.  The kids in the front couple of rows could be subjects, wizards or other fairy tale characters.

There is some writing on the left of the theater which I have been unable to make out.  Also, behind the "king and queen" it looks like a box office.

This picture raises a lot of questions but the main ones I am interested in are:
1.  What is the play?
2.  Where and when was the picture taken?
3.  Who are these kids?  Is it a school group?
4.  What is the show being advertized on the right?  Is it or whatever survives available on DVD? 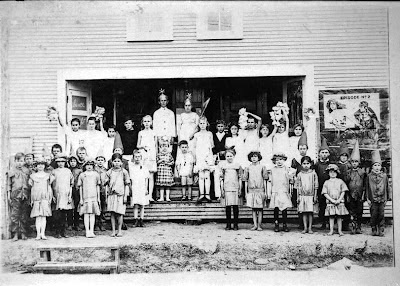 Posted by Daniel Sample at 7:57 AM