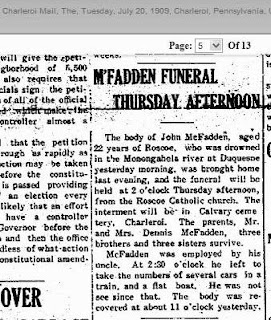 The body of John McFadden aged 22 years of Roscoe, who was drowned in the Monongahela river at Duquesne  yesterday morning, was brought home last evening and the funeral will be held at 2 o'clock Thursday afternoon from the Roscoe Catholic church.  The interment will be in Calvary cemetery, Charleroi.  The parents, Mr. and Mrs. Dennis McFadden, three brothers and three sisters survive.
McFadden was employed by his uncle.  At 2:30 o'clock he left to take the numbers of several cars in a train, and a flat boat.  He was not see (sic) since that.  The body was recovered at about 11 o'clock yesterday.
Posted by Daniel Sample at 12:59 PM