This is probably fairly obvious, but it is something I do not always do, especially online. 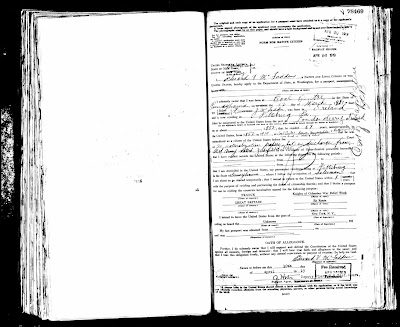 This is the passport application for my uncle Edward McFadden (1889-1977) from April 1919 from Ancestry.com.

Besides the information about him:
1. born in Coal Center, Pennsylvania, 12 March 1889
2. lives in Pittsburgh
3. is a salesman
4. visiting France and Great Britain as part of the Knights of Columbus War Relief
Work
5. left from New York

It also has information about his father, my great grandfather Dennis McFadden (about 1847-1924).
1. ﻿Dennis emigrated from Londonderry Ireland about 1852
2. he has no naturalization papers but a discharge from the US Army dated 25 July
1865
3. he lived uninterrupted in the US for 67 years 1852-1919
4. he lived in Coal Center, Roscoe, Monongahela & Pittsburgh, Pennsylvania and
also the state of Ohio

I logged on to check it a few times to verify the information.  For some reason this last time, I clicked the arrow for the next page and found this: 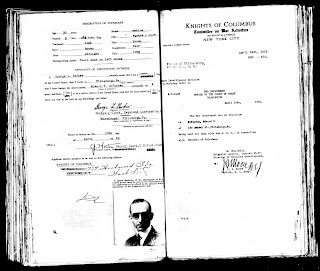 Not only does it have his street address, and a physical description of Edward but also a photograph of him from 1919.  I believe this is the earliest photo of him that I have, the others being from the 1930's and 1977.

Then on the next page is the physical description again, along with a letter of introduction from a representative from the Knights of Columbus. 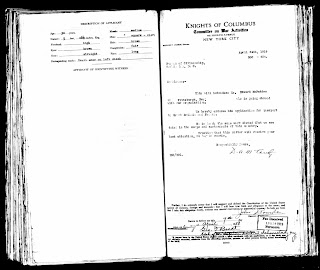 So to sum up, don't forget to turn the page.
Posted by Daniel Sample at 7:31 AM