John McFadden is possibly the brother of my great grandfather Dennis Cornelius McFadden (1847-1924).  Family legend has it that they left Ireland during the Potato Famine but so far I have been unable to determine exactly when they left Ireland and where in the US they arrived.  It appears they settled in Ohio and there is one promising family that I have been looking into.
Both brothers enlisted in the army at the start of the Civil War  in Ohio and fought for the Union.  There is a John McFadden who served in Company K, 36th Ohio Infantry.  This John was wounded at the battle of Mission Ridge, Tennessee on 25 November 1863 and died on the 26.  He is buried in Chattanooga National Cemetery in Tennessee.
A widows pension was filled out by Johns parents, Edward and Alice McFadden.  Alice applied on 29 December 1874 and Edward filed on 25 March 1887.  So far the pension file has not been located in the FamilySearch, Ancestry.com or Fold3 databases.  My next step is to contact the NARA.  Hopefully I will have better luck getting his pension files than I did with the file for his brother Dennis. 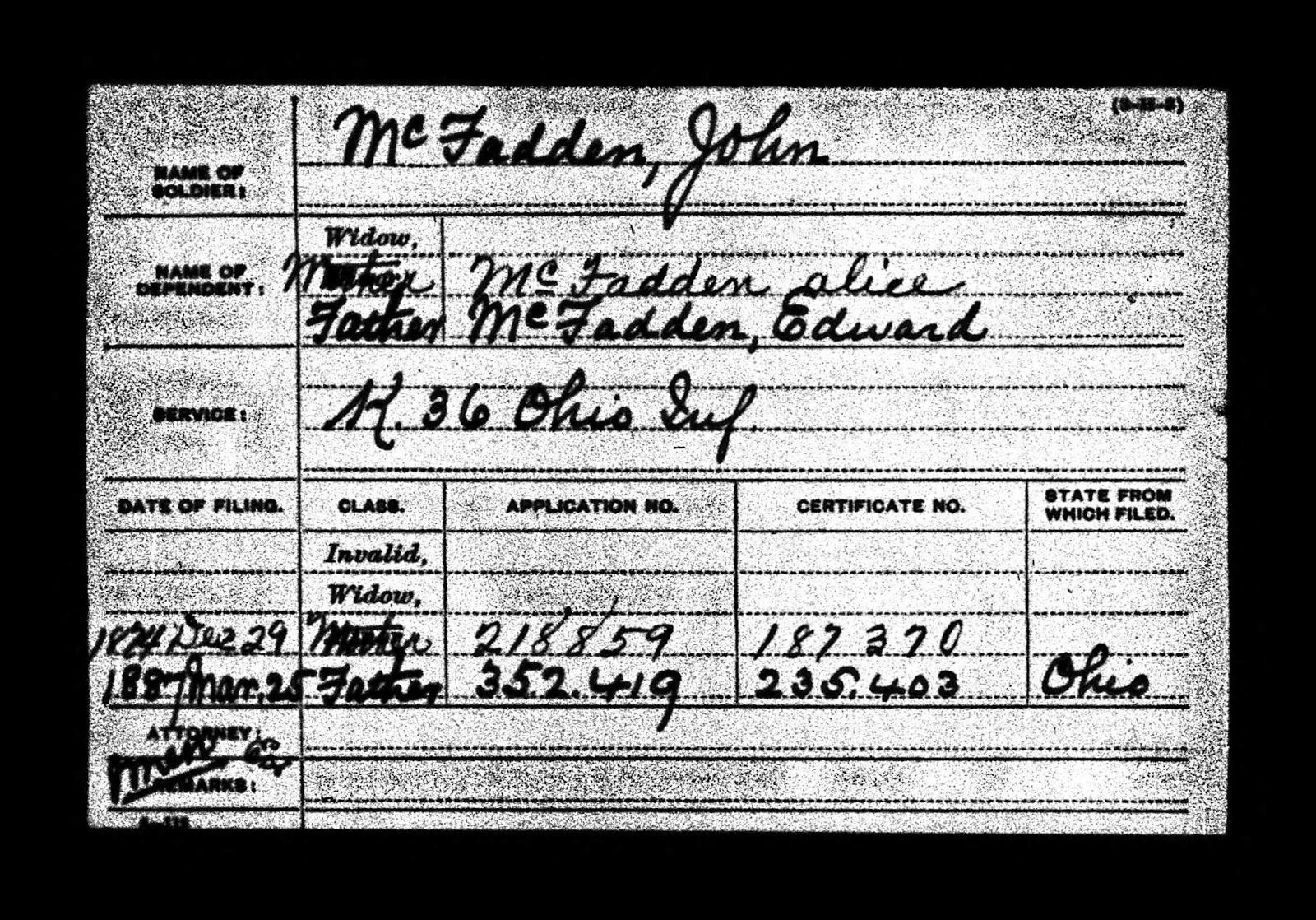 The names of Edward and Alice do appear on Dennis McFadden's death certificate from 1924. 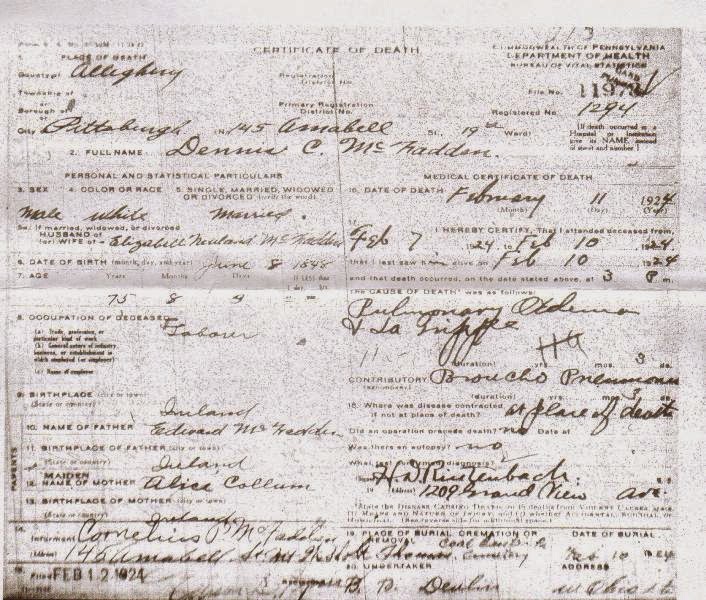 And Edward Vincent McFadden, son of Dennis, stated that his father lived in the state of Ohio for a time on his passport application in 1919. 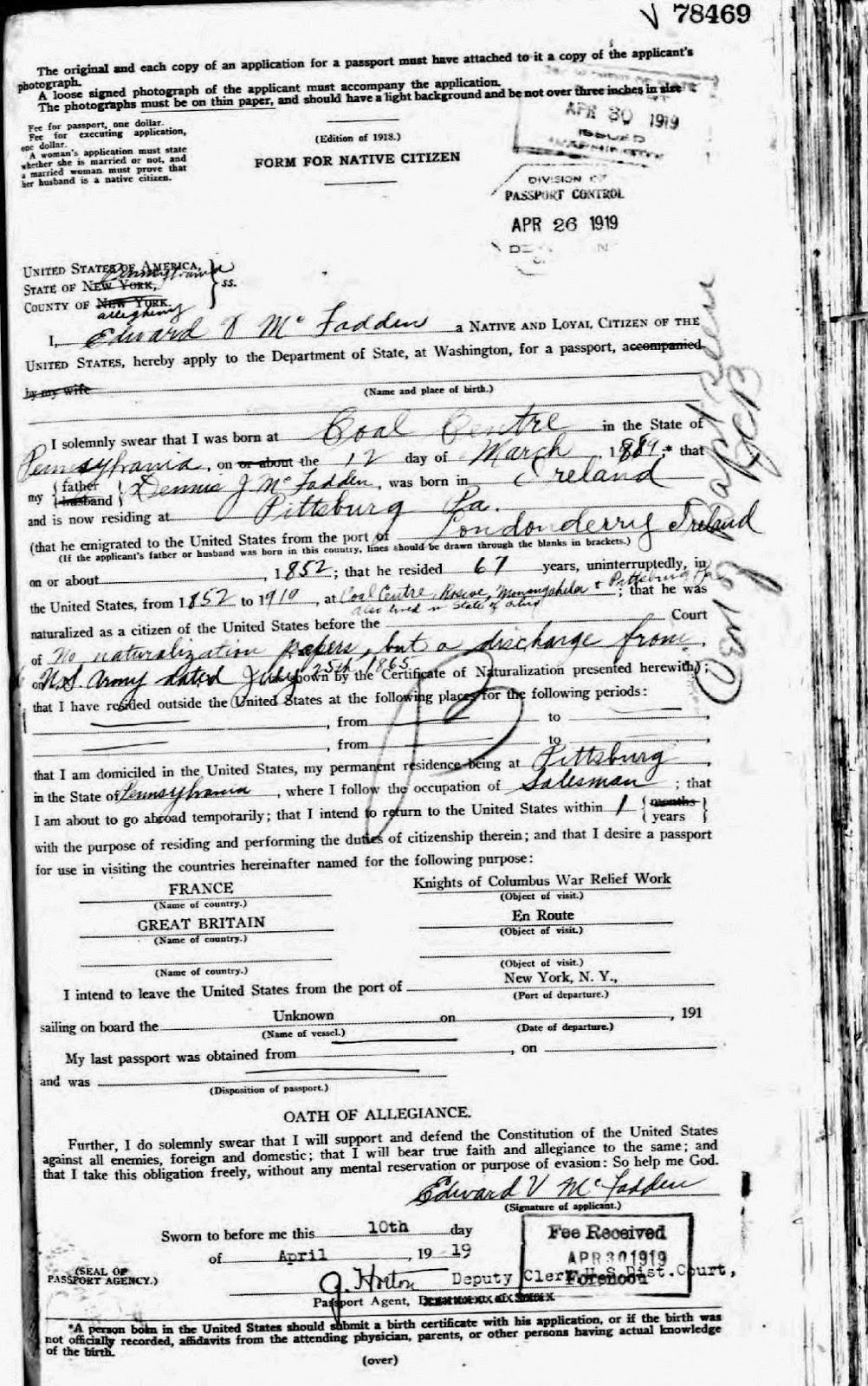 Both John and Dennis appear in the 1860 census for Vinton County, Ohio with their presumed parents Edward and Alice.

Edward and Alice also appear in the 1870 census for Vinton County, Ohio.

I believe that Edward and Alice from the 1860 and 1870 censuses are the same, but I have yet to find anything that indicates they are indeed the parents of the John and Dennis I am researching.
So far, I have been unable to locate any additional information on Edward and Alice after the pension application.  My next steps will be to look for probate and tax records in Vinton County.  Also, I plan to search local newspapers and hopefully find an obituary or some other bits of information.