About three or four years ago I submitted a request to the NARA for my great grandfather Dennis Cornelius McFadden’s (1847-1924) Civil War pension application file. A couple of months later I received a reply stating that they did not have the file.
Next I submitted a Freedom of Information Act request to the Veterans Administration for the pension file. A little later I received a reply that they did not have it at their location and would forward the request to another office. A while after that I received another letter saying the same thing, and then again.
I had given up hope of getting the file but then one day almost three years later it showed up in my mailbox. I was thrilled to finally have it and it has helped fill in a few gaps
Shortly after turning 18 Dennis enlisted in the United States Army in Portsmouth, Ohio on 18 July 1863.[1]  He was paid $25.00 out of a promised total of $100.00 for joining the army. He served as a private in the First Ohio Heavy Artillery, Company E.[2]  Between 14 December 1863 until February 1864 Dennis was absent with leave.[3]  His military pension file does not address this absence so it’s still a mystery[4].
Dennis mustered out of the army on 25 July 1865 at Knoxville, Tennessee.  It is currently unknown where he went and what he did immediately after the war.  According to the Declaration for Pension[5] after his service he moved to Vinton County, Ohio. Then in 1867 he moved to Washington County, Pennsylvania and remained there up to 1900. 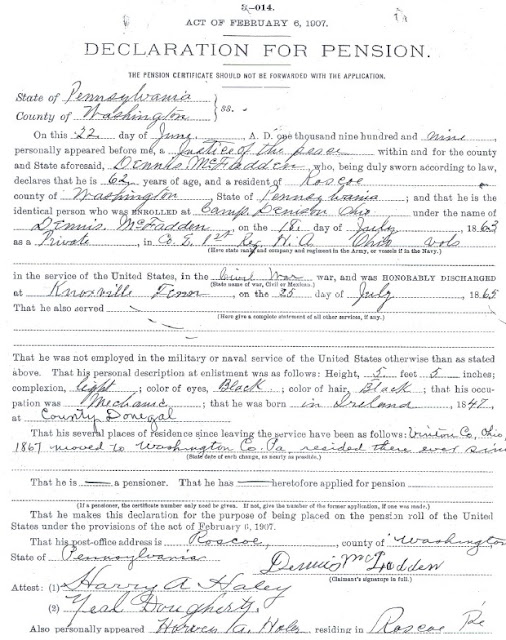 The next time Dennis appears in the public record is 1 February 1886 in his Application and Statement of Marriage to Lizzie (Elizabeth) Neuland.  At this time both are residents of Coal Center, Washington County, Pennsylvania.[6]
So far I have been unable to locate Dennis after leaving the service and up to his marriage in 1886. I have sent a research request for the Catholic diocese for the area and am hoping they will have something in their files concerning Dennis. After that, I hopefully will be able to visit Vinton County, Ohio and Washington County, Pennsylvania and do some research there.