Memorial Day - A day for honoring and mourning people who died while serving in the United States military. 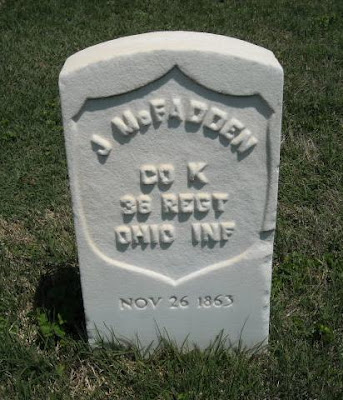 John McFadden, my great grand uncle, was about twenty one when he died at the battle of Mission Ridge in Tennessee on November 26, 1863.[1]

John served with the Ohio Infantry, 36th Regiment, Company K.
Not much is known about him other than from the testimonies of his parents, sister, brother-in-law and other acquaintances in his Civil War pension file submitted by his parents, Edward McFadden and Alice Collum.

Some things learned about John in the pension application:

Posted by Daniel Sample at 6:19 AM