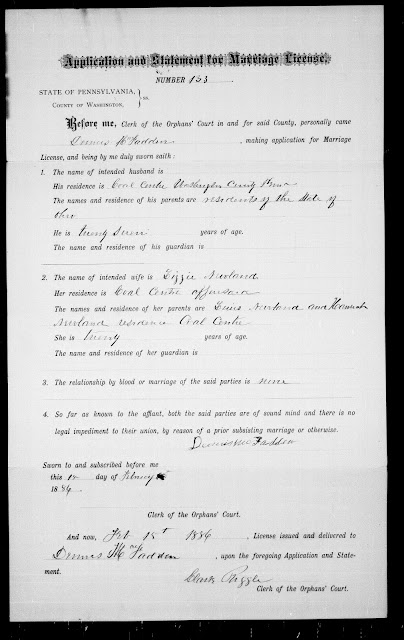 Application and Statement for Marriage License

Names and residence of his parents are:residents of the state of Ohio

He is twenty seven years of age

She is twenty years of age

A couple of interesting things from this document.

Most other records indicate that Dennis was about 19 years older than Lizzie.  Family stories suggests that he lied about his age in order to emigrate from Ireland, then lied again to serve in the Civil War.  He is said to have been about 13 when he signed up in Ohio and gave his age as 18.

The second is the reference to his parents being residents of the State of Ohio.  Again according to family stories, his father died in Ireland during the potato famine while Dennis was a child.  When  his mother remarried, the step father refused to support the McFadden children forcing Dennis and possibly his brother John to immigrate to the US between 1848-1850.

It seems with Dennis, the more information I find about him, the cloudier his life becomes.
Posted by Daniel Sample at 6:38 AM