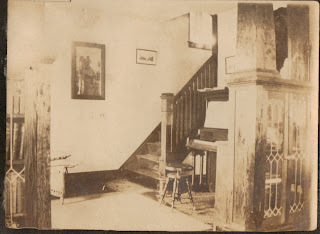 It's unusual among the pictures because it is of an interior of a house and there are no people included in the shot.   I do like the brief glimpse into what may have been the house my grandfather and his siblings grew up in.  I never remember hearing if my grandfather had a piano in his house when he was young or if he or anyone in the house ever had lessons or played.  Even when I and my brothers and sister were all taking piano lessons, the topic from what I remember never was brought up.  I'd also like to know what books are in the bookcases.  In the days before TV, computers and iPads, it would be interesting to know what they did for entertainment.

The large picture on the wall, at first I thought was a portrait of a woman in a black dress with her head faded out.

After playing around with the image for a little bit I now think it is a picture of a boy/girl on something with their arms around each other’s shoulders.  Or perhaps she is just behind him holding onto him.  There also appears to be woman on the right looking at them. So far, I have not found any other pictures in the album that match up with this one.

If it was the home or one of the homes where my grandfather grew up , it was most likely in or near Russellville Arkansas around the early 1900s to the 1920s.  Of course this is nothing but guesswork but since as far as I know, no one is still alive who would have remembered the house, guessing is about all I can do.

**Edited to add:  Playing around with the picture a little more, it looks there is a small child with his back to the camera on the bottom right.  Can't tell what, if anything, is on the lower left of the picture.

Posted by Daniel Sample at 1:18 PM