Margaret McFadden (1845-1905) was the sister of my great grandfather Dennis McFadden (1847-1924).  According to family stories, when Dennis and his brother John arrived in America circa 1852, they stayed with a sister who was already living in Ohio.  She was also said to have been married to a man named Dennis or Daniel Ferry.
No information so far has been discovered about her life in Ireland, her immigration and her eventual residence in Ohio.  The earliest record of her so far comes from several newspaper notices published at the time of her death in 1905.

﻿
Mrs. Margaret Ferry
Mrs. Margaret Ferry died at the
home of her daughter, Mrs. Herman
Schildhauer, No. 349 Buckingham
street, Saturday.   The deceased was
aged 60 years and leaves three sons
and two daughters and one brother
besides a circle of friends.   Funeral
services will be conducted at St. Fran-
cis de Sales church Monday at nine
o'clock  and the remains will be laid
to rest in the Cedar Hill cemetery.

Here is her Find A Grave memorial at Cedar Hill Cemetery in Newark Ohio. ﻿﻿﻿ 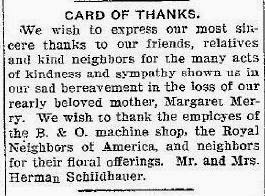 CARD OF THANKS
We wish to express our most sin-
cere thanks to our friends, relatives
and kind neighbors for the many acts
of kindness and sympathy shown us in
our sad bereavement in the loss of our
rearly (sic) beloved mother, Margaret Mer-
ry.  We wish to thank the employees of
the B & O machine shop, the Royal
Neighbors of America, and Neighbors
for their floral offerings.  Mr. and Mrs.
Herman Schildhauer.

Wills Probated
The wills of Margaret Ferry, de-
ceased of Newark, and Jacob Benner,
deceased. of Hartford, have been ad-
mitted to probate.

﻿
Probate Court
...Margaret Schildhauer has been ap-
pointed executrix of the last will and
testimony of Margaret Ferry, de-
ceased, of this city.   Bond, $2000(?). 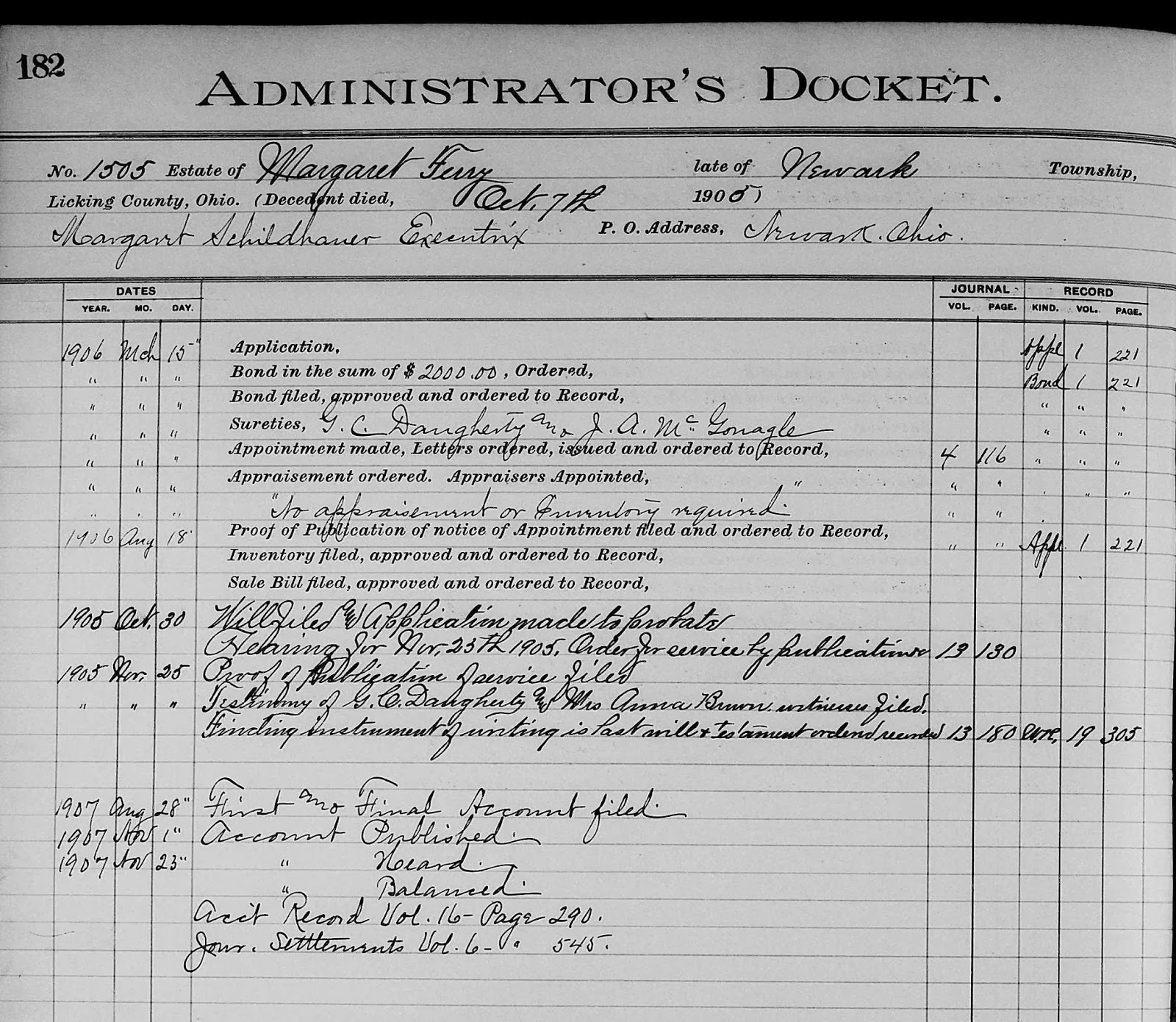 With this I was able to order the probate records for Margaret Ferry.  I have not transcribed the full document yet, but I have pulled out some key information that will help me continue my search into this line.

Her probate file states that she died on 1905 Oct 7 in Licking County, Ohio.  It also includes a transcription of her will which names several family members, their relationship to Margaret and where they lived at the time, if known:


﻿﻿﻿﻿ The link between Margaret Ferry and Dennis McFadden is indirectly supported by this notice published in 1919:

﻿ ﻿
Mr. and Mrs. Dennis McFadden
of Pittsburg returned this afternoon
after visiting their niece, Mrs. Her-
man Schildhauer, of West Charles
street.