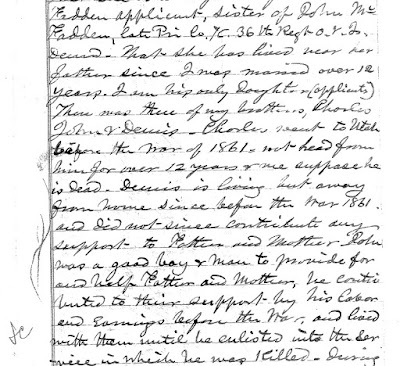 Margaret McFadden applicant, sister of John McFadden, late (?) Co. K, 36th Reg, Ohio 2. Deceased. That she has lived near her father since I was married over 12 years. I am his only daughter (applicants). There was three of my brothers, Charles, John & Dennis (abt. 1847-1924). Charles went to Utah before the war of 1861 – not heard from him for over 12 years & we suppose he is dead. Dennis is living but away from home since before the war of 1861 and did not since contribute any support to father and mother. John was a good boy & man to provide for and help father and mother, he contributed to their support by his labor and earnings before the war and lived with them until he enlisted into the service which he was killed.

Alice Collum McFadden, John’s mother stated essentially the same thing. The one thing she added was that Charles was in the army when he left.

…Dennis, John and Margaret; (?) Charles left before the late rebellion, went to Utah, I have not heard from him since he left when he was with army going to Utah. I suppose him dead…

So far I have not found anything to indicate if Charles enlisted or if any Ohio units went to Utah before 1861. I have also not found any leads on a Charles McFadden in Utah during and after the Civil War. Right now, this is the only mention of him I have found and I am not sure of the best way to proceed. Unfortunately, this pension file also mentions that the McFadden’s house burned and with it pictures and letters from John and likely information on the rest of the family.