Manus Ferry was the husband of my great grandfather's sister Margaret McFadden (abt 1842-1905). I have not found much about him but today I received his death record from the Diocese of Steubenville, Ohio. 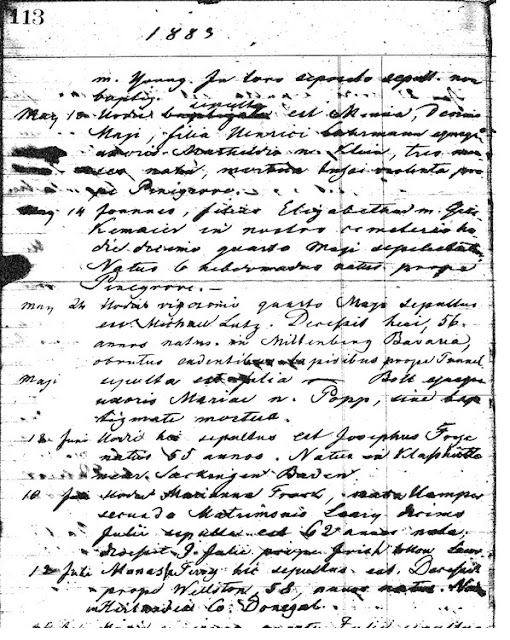 The final entry on this image concerns Manas (sic). There are Italian terms so I used a list of common Italian words to try to figure out what it said.

It looks like it mentions a village or town before County Donegal where Manas was born, but after looking at maps and searching online, I have not found anything to what is written above.

While this does give me a more specific date range to search for other death records, such as an obituary or notice in the local newspaper, it brings up several more questions.

Manas is listed as being buried at St. Mary's Cemetery in Pine Grove, Ohio though it has his age as 52 instead of 58. Wellston which is listed in the death record is about an hour away from Pine Grove. I'm guessing he died in Wellston but for some reason was buried in Pine Grove. If I can figure out some of those other words are, perhaps it will clear things up a little.


My next task is to locate a newspaper from the Pine Grove area of Ohio and hopefully find an obituary.