I recently found the Southern Claims Commission record on the brother of my gr gr gr grandfather George Washington Webb (1806-1862). During the build up and throughout the Civil War he lived in Pope and Crawford Counties, Arkansas. According to the testimony of Hampton and the witnesses he remained a supporter of the Union.

The claim was filed in 1871 for Hampton to be reimbursed for two horses that the Union troops confiscated for the war effort in 1863.

Some of the report is difficult to read so I am in the process of transcribing it. One section caught my eye as particularly interesting. It is in the testimony of Hampton's son in law George D. Kirkpatrick (1813-1901). 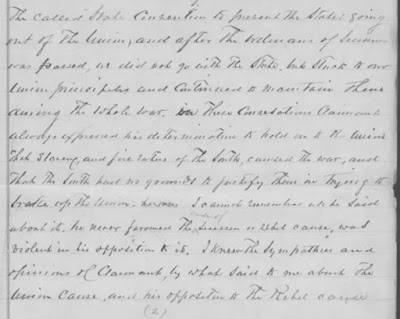 The called State Convention is (unknown) The States going
out of The Union, and after the (unknown) of Secession
was passed we did not go with the (unknown) but stuck to our
Union principles and continued to maintain them
during the whole war. In These conditions claimant
always expressed his determination to hold on (unknown) the Union.
That Slavery and fire eaters of the South caused The war, and
That The South had no grounds to justify this in trying to
Brake (sic) up the The Union. I cannot remember all he Said
About it. He Never (unknown) The (unknown) of Secession or Rebel cause. was
Violent in his opposition to it. I knew the Sympathies and
opinions of Claimant by what he Said to me about The
Union Cause, and his opposition to the Rebel cause.

Posted by Daniel Sample at 5:52 PM