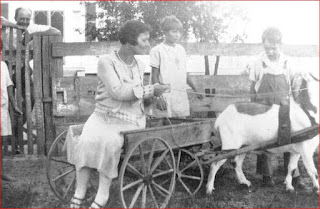 Picture was taken approximately 1925 at the Wilcott Farm on Pudding Ridge Road.  The young boy with the goat is Thomas Edward Creekmore, Jr.  His father, Thomas Sr., farmed for the Wilcott's. The young girl in the picture is his sister, Mary Creekmore Elliott, who was born  around 1917.  The older woman in the cart and the man standing beside the gate are unidentified. 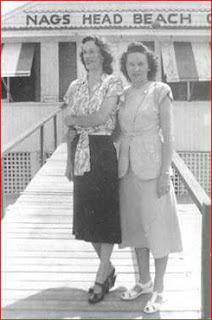 Sarah (Creekmore) Bell and her younger sister, Mary (Creekmore) Elliott.  Mary married Millard Elliott of Fort Worth Texas.  Mary is buried in Moyock Cemetery.  Her husband was a descendent of Sam Jones, the last President of the Republic of Texas.

In 1940[4] she is 22 and still in the household of her parents. According to the census they were enumerated on 2 May 1940 and she was listed as single.

Meanwhile Millard is living in Fort Worth, Texas[5] in 1940 according to census. He and his family were enumerated on 8 April 1940 and his status is listed as being married.

19 August 1940 he enlisted in the Army[6] in Fort Worth, Texas.  His marital status here is single without dependents. He was released from the service on 12 July 1945[7]. For now I am proceeding as if the 1940 US Census taker made the error.

Both appear to vanish from the historical record until they pop up in Fort Worth, Texas living in the household of his parents, Millard Alexander Sr. and Ethyl Elliott[8].

I have browsed the marriage indexes for Currituck County, North Carolina and Tarrant County, Texas and have not found Millard or Mary or any similar names listed between 1945-1949. I imagine that he was stationed in or relocated to North Carolina after his service and that is where they met but that is just a wild guess at this point.

Posted by Daniel Sample at 2:50 PM