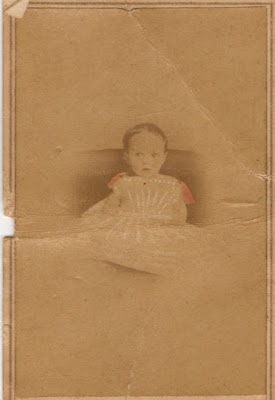 Another mystery photo from my grandmother's (Ruth McFadden Webb 1905-1985) collection. Many of the photos in the box that eventually made its way to me were mixed together so I am unsure if this is someone from her side or my grandfather's (Clyde Lee Webb 1898-1987). 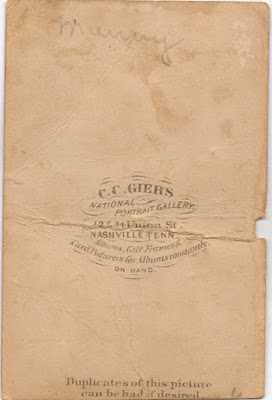 On the back at the top someone had written something. It could be Manny, Mommy, Murray or something similar. So far I have not come across anyone on either side named Manny, Murray or anything particularly close.

The name of the photographer is also on the back. C. C. Giers National Portrait Gallery at what looks like 45 Union Street in Nashville, Tennessee. Some of his photographs are held at the University of Tennessee, Knoxville McClung Museum of Natural History and Culture. Under his biographical information it states that his geographical location was 43 and 45 Union Street in Nashville about 1863-1877.

When Ruth's father (Dennis Cornelius McFadden1847-1924) arrived in America he and his family lived in Ohio, the Pittsburgh, Pennsylvania area and Baltimore Maryland.

Clyde Webb's grandfather, Zephaniah T. Webb (1828-1906) was born and lived in Tennessee and at some point moved to Arkansas.

For now I am going on the assumption that this person was a Webb or related family member and was born and was born between 1863-1877. It's also difficult because of how babies and toddlers were dressed back then to determine if it's male or female so for now I will assume it could be either.

Posted by Daniel Sample at 9:00 AM