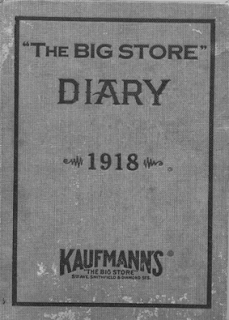 The 1918 diary of my great grandmother Elizabeth Neuland McFadden (1866-1949) is unusual because she was not a very consistent writer. It contains entries between 1918 to 1940. Also, at some point my grandmother Ruth McFadden Webb (1905-1984) made some entries in the diary as well.

The diary includes many names, some I know and a lot I don't. I have tried to figure out who they are but many are still a mystery.

In the back of the diary in grandmother Ruth's handwriting are a few names with addresses. One is for Mrs. McFadden.

During the time they had this diary, they lived in the Pittsburgh, PA area and later on in Baltimore, MD. I haven't determined which Cleveland Mrs. McFadden lived in. It could have been Ohio or Pennsylvania, or another one. I have not found any listings for a Graham Terrace in any of the possible areas she may have lived. Also, I do not know when this entry was added. Again it could have been anytime between 1918-1940 so Mrs. McFadden could have lived almost anywhere or had been in Cleveland the whole time.

The other mentions of Mrs. McFadden are in a similar vein. None shed any light on who she is and how she might be related to Elizabeth and Ruth.

Because Elizabeth addresses her more formally, I assume Mrs. McFadden is an older woman. However, as far as I know the older McFadden women in the family had died before 1918. The only daughter who never married and became a nun was Margaret (Sister Donata) McFadden (1894-1953) and she was always referenced as Margaret in the diary.

She could be an unrelated friend or neighbor, but so far I have not found anything that will lead me to one  answer or another.
Posted by Daniel Sample at 1:02 PM