Flight to Dublin and first day.

On October 4 I flew to Dublin. I arrived at the airport at about 10 AM on October 5.

The only hiccup was my first part of the trip from Houston to Chicago. The plane arrived early but got to the gate late, so I had to run to make it to the flight to Dublin.  Fortunately I traveled light and only had carry-on luggage so I didn't have to worry about my clothes and stuff not arriving with me.

I checked into Bushwells Hotel. It was an older, smaller hotel where you leave the key with the desk when you go out. It was much better than staying at a larger, chain hotel.

I arrived a day early to get used to the time change, so after checking in and to avoid going to sleep I took a self guided tour of the city.

As I wandered around I saw St. Patrick's Cathedral. 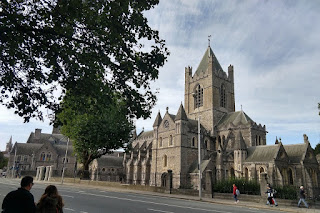 When I finally returned my my room. I unpacked, and got out my computer and started reviewing my family history notes and what we were doing for the week.


It was about 6:30 and I was getting extremely tired but still didn't want to sleep, so I went down to the bar and had a Guinness or two.

I returned to my room about 8 and realized I hadn't had anything to eat since the plane, so I ordered my first meal in Ireland. And I did something I never do, I got room service.

After 11, I didn't feel tired, but went to bed anyway. I had downloaded some RiffTrax to my iPad, so watched a little until I could fall asleep. I was still up at 3:30 and finally was able to sleep for a bit. I didn't wake up until after 2. I'm glad I arrived a day early and didn't have to do anything until Monday.
Posted by Daniel Sample at 6:15 PM