This post is part of Amy Johnson Crow's 52 Ancestors in 52 Weeks challenge.  The object is to write something about 1 ancestor each week.  More information can be  found at her blog No Story Too Small.

I've fallen a little behind so today I will cover one of my Revolutionary War ancestors, Jeremiah Webb.  I haven't found too much on him and most of what I have is from a deposition filed in open court in Harrison County, Indiana, 22 March 1823. 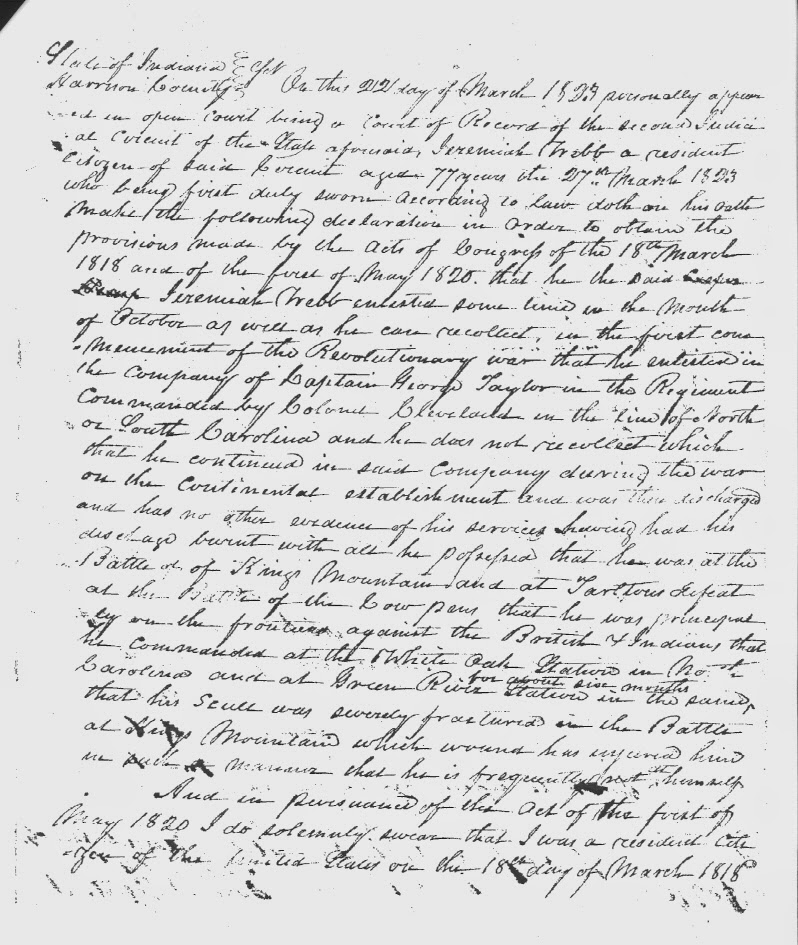 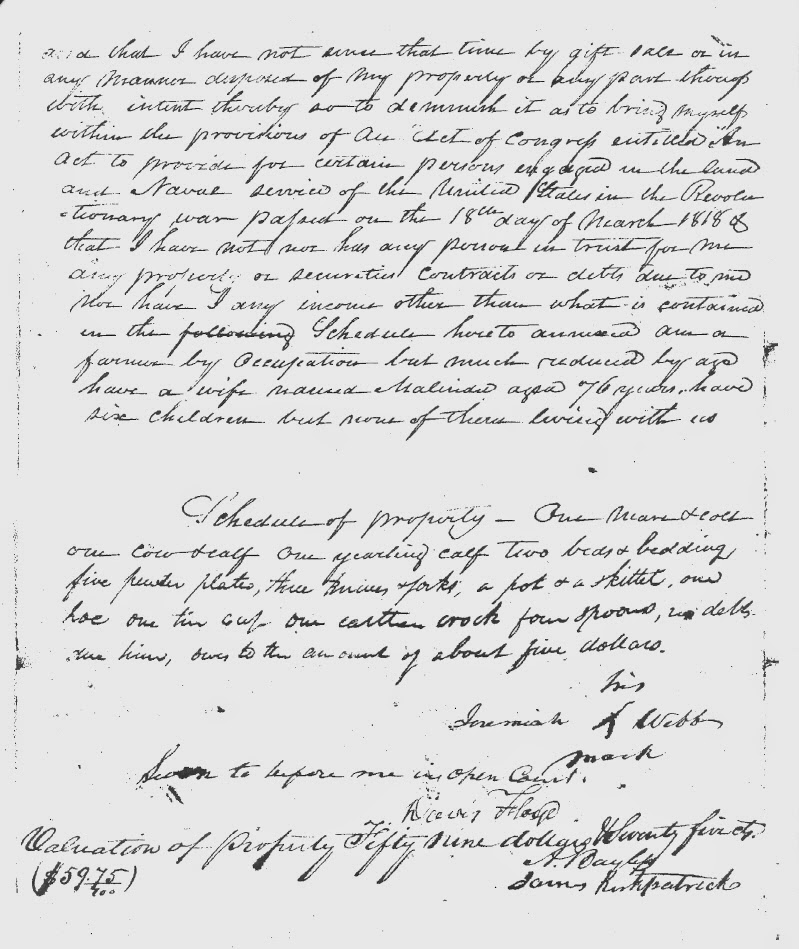 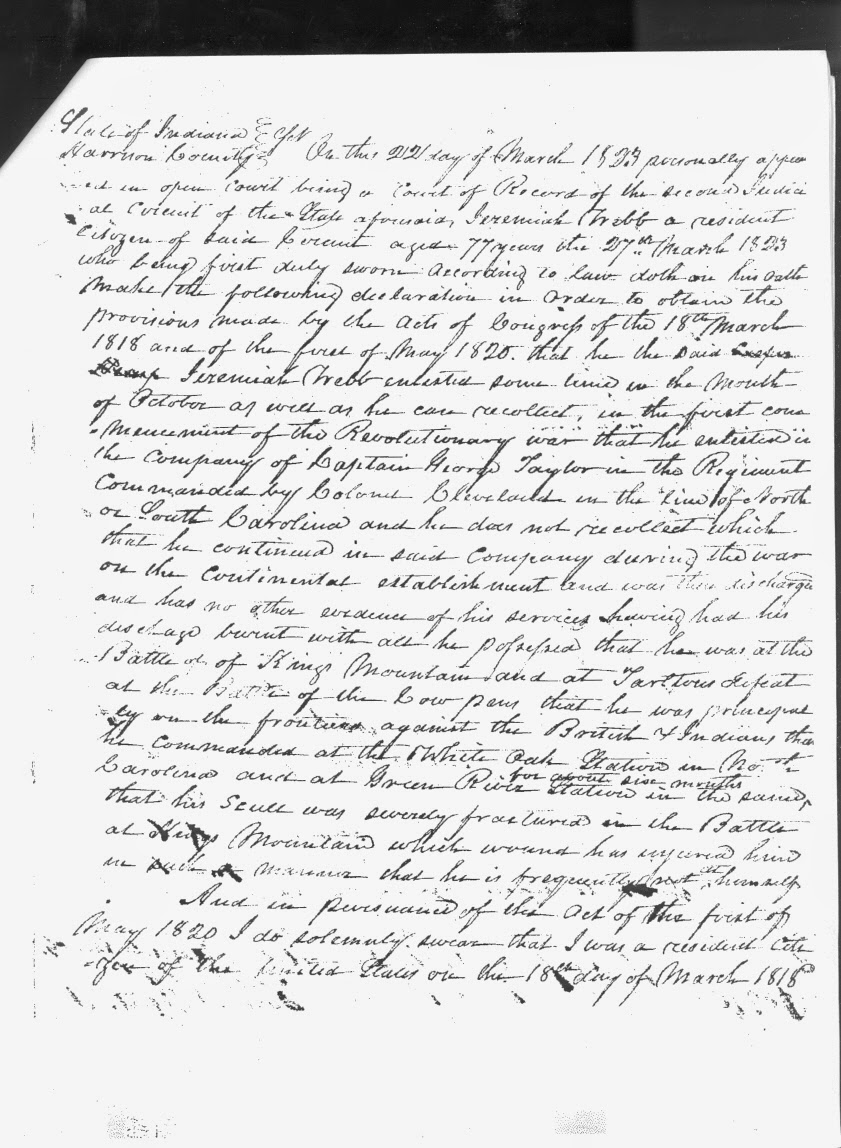 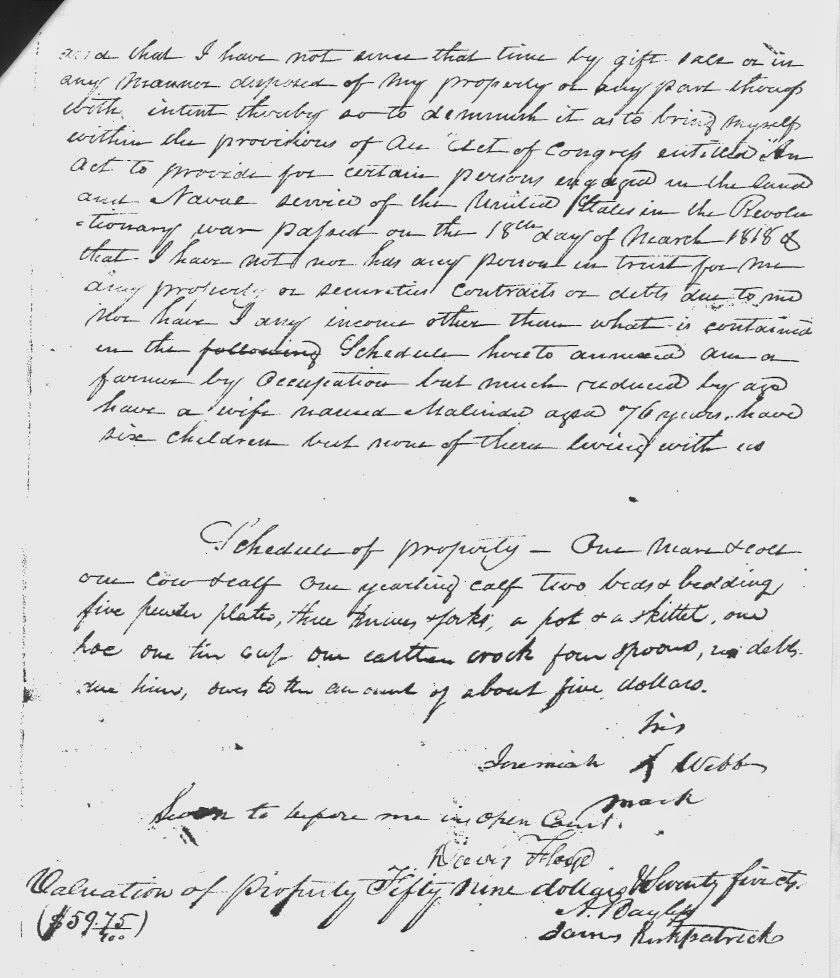 On the 22 day of March 1823 personally appeared in open court being a Court of Record of the second Indiana ___________Circuit of the State aforesaid, Jeremiah Webb a resident citizen of said Circuit, age 77 years the 27th march 1823 who being first duly sworn according to law doth ______ his oath make the  following declaration in order to obtain the provisions made by the acts of Congress of the 18th March 1818 and of the first of May 1820. That he said Jeremiah Webb enlisted some time in the month of October as well as he can recollect, in the first commencement of the Revolutionary War that he enlisted in the company of Captain George Taylor in the Regiment Command by Colonel Cleveland in the line of North or South Carolina and he does not recollect which.  That he continued in said company during the war on the continental establishment and was then discharged and has not other evidence of his services having had his discharge burnt with all his possessions.  That he was at the Battle of Kings Mountain and at Tarlton's Defeat at the Battle of the Cow Pen.  That he was principally on the frontier against the British & Indians.  That he commanded at the White Oak Station in North Carolina and at Green River in the ________ for about six months.  That his skull was severely fractured in the Battle at Kings Mountain which wound has injured him in such a manner that he is frequently not himself.

And in pursuance of the Act of the first of May 1820 I do solemnly swear that I was a resident citizen of the United States on the 18th day of March 1818 and that I have not since that time by gift or sale or in any manner disposed of my property or any part there of with intent thereby so to diminish it as to bring myself within the provisions of an Act of Congress entitled An Act to provide for certain persons engaged in the Land and Naval service of the United States in the Revolutionary War passed on the 18th day of March 1818 & that I have not nor has any person in trust for me any property or securities contracts or debts due to me.  Nor have I any income other that what is contained in the following schedule here to _______ ________ farmer by occupation but not much reduced by age have a wife named Malinda aged 76 years have six children but none of them living with us.

Schedule of property-One mare & colt, one cow & calf, one yearling calf, two beds & bedding, five pewter plates, three knives & forks, a pot & a skillet, one hoe, one tin cup, one ______ crock, four spoons, not debts due him, owes to the amount of about five dollars


I have a court document from Chestnut Hill, Jefferson, County Tennessee, where Meredith Webb (my g g g g grandfather) states his father was Jeremiah Webb.

Meredith Webb a Guarnishee in this cause saith he doth
not owe anything himself to the Deft. but believes his
father Jeremiah Webb is indebted to the plaintiff.

I've tried to get the full record of this case and any supporting documents from Jefferson County, but so far have not been successful.

I haven't proved yet that this is the correct Jeremiah, but so far it hasn't been disproven either.  My next step is to create a time line for both individuals and other family members then go from there.
Posted by Daniel Sample at 12:56 PM