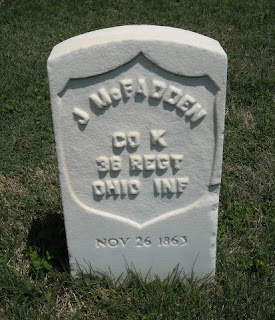 I recently received the pension file filled out by his parents after his death and all the names, dates and locations do add up so I am as certain as can be that this is the brother of my great grandfather Dennis McFadden (1847-1924).

Unfortunately I do not have any photographs of my known ancestors in their military uniforms.  According to the pension file filled out by John's parents, after his death their house burned and with it all photographs, letters and the like.  They should have, as I have to remind myself, back things up on an external hard drive and store it at another location!

I do have a few pictures of Navy seamen and a soldier from the WWI area but so far I haven't been able to identify them.
Posted by Daniel Sample at 8:22 AM