My current genealogical nemesis is my great grandmother Sealy (Celia, Celie, Clie) Autrey (1859-1907).
According to the Lincoln Parish Louisiana Marriage Records 1873-1901 compiled by Willie Huffman Farley says that Sealy E. Autrey married J. H. Sample on 7 July 1878.  I also have the marriage certificate that verifies this. 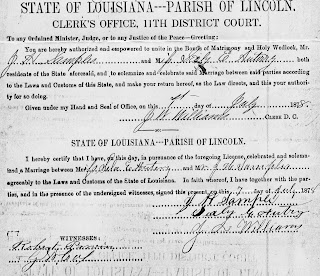 Also, on the same page of the 1880 census is listed John Autrey’s family with both Tereanna and Sarah living at home.

However, according to Absalom and Elizabeth Autrey and Their Descendants a Tereanna Autrey, born in 1875 in Lincoln Parish, Louisiana, married Joe Sample. It is possible that Sealy is a nickname for Tereanna, but the 15 year gap in birth dates seems suspect.
I have also seen online sources where Teranna Autrey married Joe Samples.  This source also lists a Sarah E. Autrey born in 1859.
While Tereanna did have a sister named Carrie born in 1860, references I’ve seen indicate that she married a Colvin.
There is also a 10 year old Elizabeth in the household of John and and Dianacy in 1870.  This could be either Sealy , Carrie or someone else.

I have found sites online that indicate Ainsley H. Colvin (1858-?) married Carrie Elizabeth Autrey and lists her birthdate as about 1860 or 1862, born in Hico, Lincoln Parish, LA..
This is a very tangled mess.  I’m thinking if I can find a death certificate, obituary or something similar it might help resolve this matter.
Posted by Daniel Sample at 11:25 AM