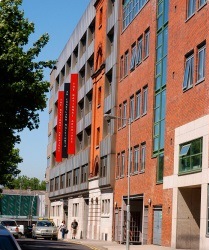 We began the day by visiting the National Archives of Ireland. We met with an archivist who explained the types of resources they have and showed several examples of the types of records they have. We then went downstairs to look at and search the various finding aids. 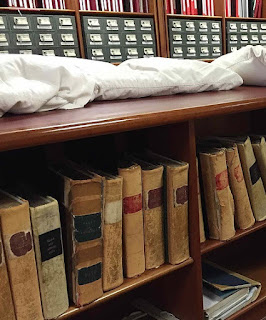 Unfortunately my ancestors left Ireland as far as I can determine in the late 1840s to early 1850s. Records were not kept until just after that period beginning in the late 1850s and on.

While I did not find my ancestors I did find many McFadden's, Collum's and Ferry's in County Donegal in and around Falcarragh. I have begun mapping them out to research them and hopefully determine if any of them are cousins. 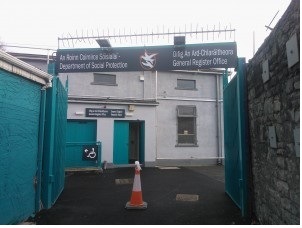 After that some of us went to the General Register Office (Oifig An Ard-Chláraitheora) which is the central civil repository for birth, stillbirth, death, marriage, civil partnership and adoption records in Ireland. I didn't need anything from there but did search the indexes for the above names.

While I didn't find anything very helpful for me, I did get some general information and now know where to go when and if I find something.

After this, I walked around Dublin some more. Since I hadn't quite adjusted to the time change yet, I returned to the hotel, ordered dinner and a Guinness or two, then began organizing my notes and doing some online searching while things were still fresh in my mind.
Posted by Daniel Sample at 11:50 AM