We visited the National Library of Ireland. After an introduction to the library and its resources we were set loose to the reading rooms to do our own things. I spent most of my time looking into the history of County Donegal and Falcarragh around the time my great great grandparents were there. 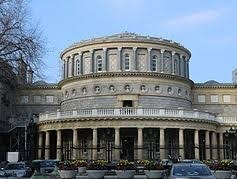 I also looked into the McFadden's, Collum's and Ferry's who lived in the area after my folks left. It's a good bet some or maybe many are related but so far I haven't been able to prove it. 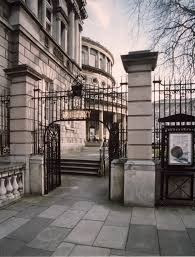 After lunch, I decided to look through some old newspapers to see what was going on in the world and to possibly find a birth announcement for my great grandfather, Dennis Cornelius McFadden (1848-1924). His death certificate has his birth date as June 8, 1848 and most of the other records have his birth year as about 1847-8. 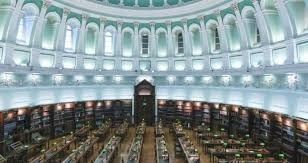 Other records indicate that he arrived in the US about 1852 and family members who knew him said he spoke with a heavy Irish accent all his life, so he was likely born several years earlier. The Ballyshannon Herald and County Donegal General Advertiser covered that time period so that is the paper I looked through.

I really didn't expect to find anything on the family primarily because they were poor, Catholic tenant farmers and didn't get into the paper other than for criminal acts. Still, old papers are fun to go through. One thing that stood out were the frequent stories I saw about the trouble the British army was having in Afghanistan.  If only people could learn from history we might be better off.

There was also a protest outside the hotel/library area for most of the week. It was the group Extinction Rebellion and they were calling for the Irish government to adopt a "budget for climate justice". The number of protestors ebbed and flowed sometime having a handful of people and other times a pretty good size crowd. Some of the chants were quite catchy as well. 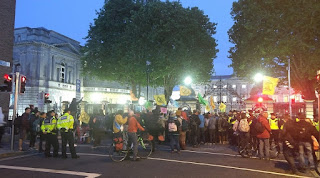 We got back to the hotel and a group of us had dinner and chatted for a while. ﻿
Posted by Daniel Sample at 6:21 PM